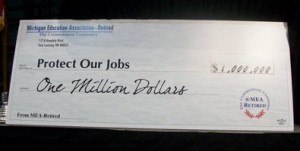 The Michigan Education Association is going all-in with the Protect Our Jobs campaign.  The MEA, and most Michigan unions, are hoping that Michiganders will agree that collective bargaining rights should be protected under the Michigan constitution.  At a recent meeting of MEA leaders, five factions of the MEA emptied their savings accounts into a joint kitty in hope of getting the collective bargaining amendment passed.  The largest contributor was the MEA-Retired who donated a cool million dollars.  In all, 1.8 million dollars was contributed towards the effort.

While the money being contributed is both important and impressive, it is not the end-all be-all.  The people who support the Protect Our Jobs campaign are up against some of the richest individuals in the country, including our very wealthy Governor.  It is unlikely that they can be outspent.  However, they can be outmanned.  The collective bargaining amendment is good for just about everyone in Michigan besides rich CEOs.  The challenge is to get people to understand that fact.  Word of mouth may be the most important resource in this campaign.

Many believe that the Protect Our Jobs campaign could be the last hope for unions in Michigan.  Republican legislators have been like vultures picking away at collective bargaining rights since they took office a year and a half ago.  Now there isn’t much meat left on that bone.  Protecting collective bargaining with a constitutional amendment would allow unions, and therefore the middle class, to take flight again.