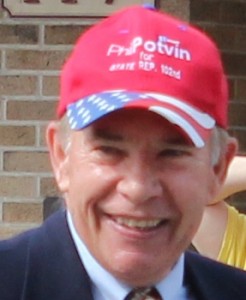 Phil Potvin, Republican Representative of the 102nd District, is a “fortunate son” of a successful businessman.  To further borrow from the lyrics of the Credence Clearwater Revival hit, Potvin seems “born to wave the flag.”  In fact, Potvin likes the flag so much that it covers the bill of his Phil Potvin hat.  Anyone who loves the flag that much surely loves the Pledge of Allegiance too.  Of course, there is nothing wrong with that as long as you don’t use it to, say, defend your homophobic views.

When Potvin was asked by the Northern Express Newsweekly if he supported expansion of Michigan’s Elliot-Larsen Civil Rights Act to protect Lesbian, Gay, Bisexual, and Transgender (LGBT) individuals from discrimination, his entire response was “No. We are one nation under God, indivisible, with freedom and justice for all.”

Let’s set aside for the moment that he actually got the pledge wrong.  In my book, freedom would mean that you are free to love who you want, and justice would mean that an employer shouldn’t legally be able to fire you from your job because of who you love.  I guess Potvin and I read different books.  I imagine he doesn’t share my appreciation for Credence Clearwater Revival either.

This entry was posted in Equality, Phil Potvin. Bookmark the permalink.
Logging In...