A Lesson from Levin 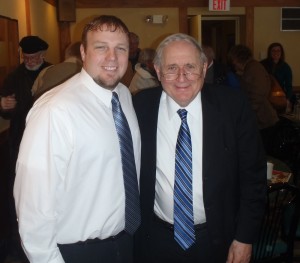 I had the pleasure of joining Senator Carl Levin  for breakfast recently.  It was a great honor to be in the presence of the senior Senator from Michigan.  I learned a lot about Washington politics that morning, and I also learned something about myself.  I learned that despite priding myself on finding out the facts of an argument before making a decision, that I too can be duped by laziness and a reliance on information from the media or corporate propaganda.

Let me explain.  The same week that I got to meet Senator Levin, I wrote my first letter to him regarding the Stop Online Piracy Act (SOPA) and the Senate version Protect IP Act (PIPA).  What I understood about the law from the media and other online sources was that it was going to force Internet Service Providers (ISPs) who host websites to police all the content on those websites.  Essentially, that would force them to be so restrictive in who they allowed to put up content that free speech would be choked out in the process.  This was the knowledge I was armed with while I was trying to do some research on Wikipedia and instead found myself reading about their protest of the legislation on their blacked out page.  Wikipidia wasn’t alone in their protest, some 7,000 other sites also took part including Google.  Not all of them blacked out, some instead used Google’s tactic of posting prominent statements like “Tell Congress: Please don’t censor the web.”   As a guy who is not a fan of censorship, I took their suggestion and wrote a letter to my representatives including Senator Levin.  Fast forward a few days and I find myself  listening to Senator Levin talk in person about the SOPA/PIPA legislation.  He was discussing how rhetoric often gets in the way of the facts on an issue.  Senator Levin explained that the legislation would require an ISP to shut down access to a website from a foreign country if an American court orders them to because the court found the site offers pirated/counterfeit products.  Now that seems reasonable.  Senator Levin noted that counterfeit computer parts are especially troubling because some are even making their way into our weapons systems.  Senator Levin said that he got more mail and calls on this issue than any other piece of legislation he can remember.  That is amazing since Senator Levin has been in office since 1978!  Because of the pubic outcry, the bill was pulled without debate.  Senator Levin offered this as proof that the ones who control the internet are the ones who really have the power.  Certainly they managed to influenced me.  I have always said that I could accept a person’s opinion on an issue if they had thought through the issue themselves.  I guess I should follow my own suggestions more often in the future.  There is nothing like some humble pie for breakfast.