August: When Kids Try to Make the Team and Teachers are Encouraged to Quit the Team

While school doesn’t start until after Labor Day, many students return to school in August to try out for a fall sports team.  Teachers also return to school in August to join their teaching team for professional development.  Yes, a teaching staff is also a team.  Teachers have a common mission which is to provide a great education for students.  At the same time, teachers need to earn a fair living so that they can provide for their own families.

We all know athletic teams operate under a set of rules.  The teaching team also operates under a set of rules known as a contract.  That contract comes by way of collective bargaining between the teachers association’s (union) bargaining team and the school district’s bargaining team.  The contract dictates the hours teachers work, the maximum number of students they will teach (their workload), their pay, and a whole bunch of other things.  An approved contract is then monitored for compliance by the school district and the teacher’s associations executive board.  The bargaining team and the executive board positions are mostly elected by the teachers much like sports teams captains are sometimes elected by their teammates.  The whole system is both democratic and fair to all parties.

Since Governor Snyder signed the so called right-to-work law, teachers now have another decision to make in August.  Besides deciding if they want to be on the teaching team for the year, they get to decide if they want to pay their fair share.  Those costs include the cost of bargaining the contract they will work under as well as any costs associated with the enforcement of that contract should one of the parties not play by the rules.  Unlike the players on a sports team, Federal rules mandate that teachers that don’t pay to be in the association still get the benefits!  It is a lot like a player being able to play in the games without ever coming to practice, maybe someday that will be known as right-to-play.  Maybe I’m bias though.  My coaches taught me that practice wasn’t optional and that that we all had to “pay our dues.” 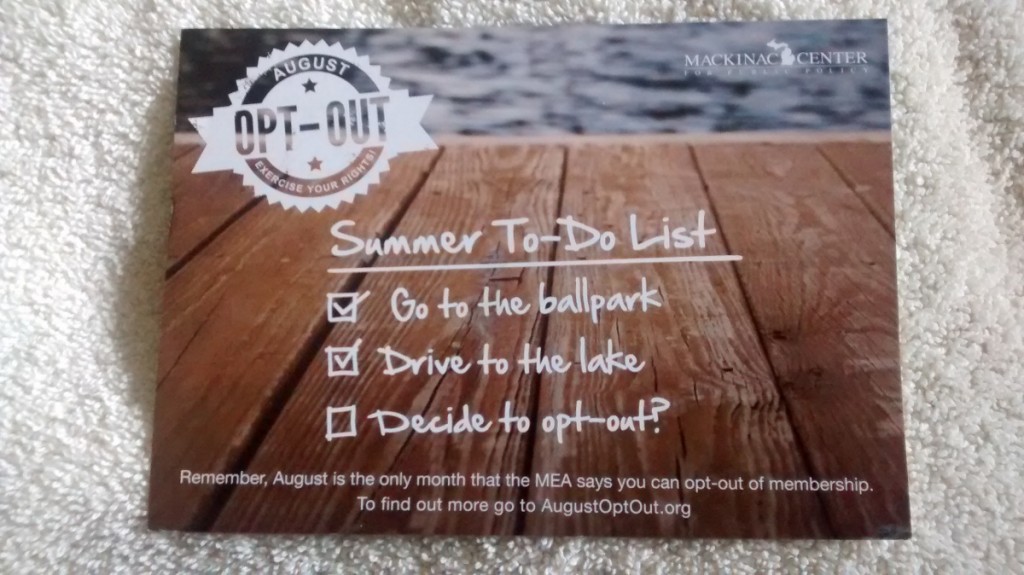 Sticking with the theme, the August opt out period has now become a political football.  The Michigan Education Association didn’t exactly promote how to quit the team last August after right-to-work became law.  Teachers who wanted to quit often had to seek out how to quit, much like educators teach students not to be passive and to seek out the answers they need in life.  Of course, many did nothing and then were surprised when they were still being billed for the services they were receiving.  This year, the conservative “think tank” the Mackinac Center for Public Policy (MCPP) has taken it on themselves to promote the August opt out window.  The MCPP would like teachers to be able to quit the team at anytime, but those aren’t the rules.  So, the MCPP has spent a lot of time promoting the August opt out window and has even sent mailings directly to teachers! 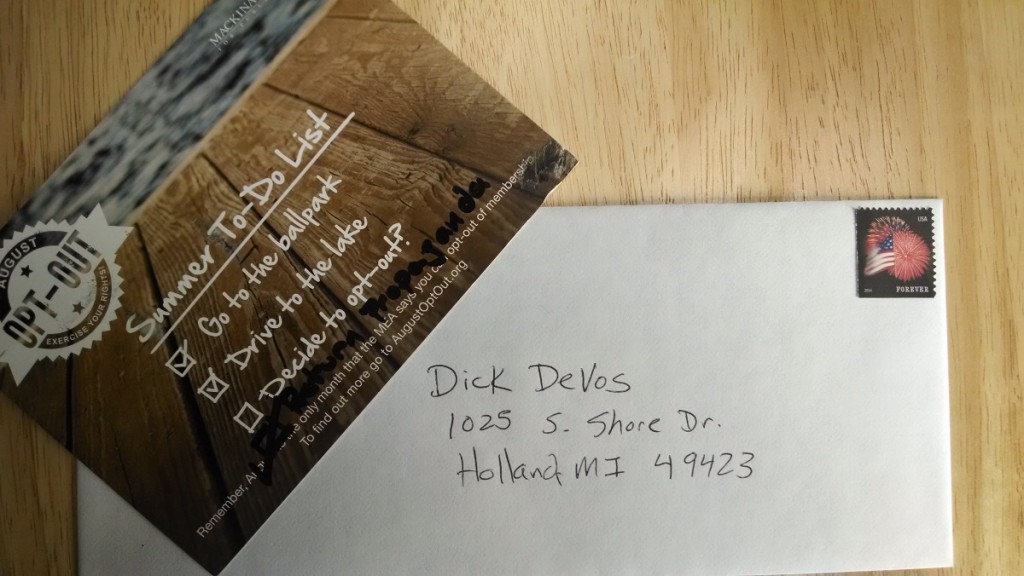 Michiganders should know that the Mackinac Center for Public Policy counts among its donors Michigan billionaire Dick DeVos.  DeVos has lead a long fight against public schools including the failed attempt at a voucher initiative in the year 2000.  Some of us had fun with the MCPP mailing. I sent mine directly back to Dick DeVos.  Others threw theirs in the trash or flushed them down the toilet.  Sadly, some will use the information to quit the team.

Anyone who has ever played on a team knows that not everyone is a team player.  Eventually, some of those players will quit the team because they expect to get something, usually playing time, without “paying their dues.”  Those type of players are never really concerned about the greater good.  The same is true for a handful of teachers in every school.  Even after the quitters quit, the rest of us teachers will continue to educate our children, support our families, and pay our fair share.  In my mind, that is how you win at this game.

Note: The title of this post was changed from “get to” to “are encouraged to.”

This entry was posted in Mackinac Center, Right-to-Work, Schools. Bookmark the permalink.
Logging In...