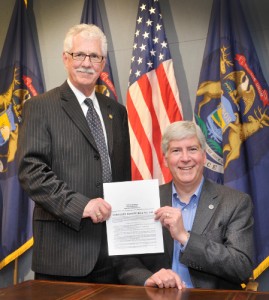 As most of you know, two Republicans were able to throw out over 200,000 signatures that would have allowed the voters to decide if the emergency manager law (PA 4) should be repealed.  While these two men would like us to believe that they are protecting us from the danger of 14 point font that looks disturbingly like 13.9 point font, what they are really doing is suppressing our vote.  As long as the law is in effect, the people’s vote is cancelled out when the Governor decides to fire your elected officials and replace them with an emergency manger.

Republicans will do anything to make sure the public doesn’t have a chance to weigh in on their proposals.  For instance, they have been making bills “referendum proof” by putting an appropriation in them.  They also have been giving laws immediate effect without the proper votes to make sure the laws go into effect before the voters have a chance to stop them via referendum.  Most alarming may be a bill waiting in the wings to require voter I.D.  We should not be surprised that this law is sponsored by Senator Darwin Booher.  Senator Booher uses our tax dollars to pay for his ALEC membership, and voter I.D. laws are an ALEC priority.

Yes, the GOP is good at oppressing people by taking away their right to vote.  It is sad that the Southern (racist) brand of the party has  infultrated Michigan Republicans thanks to corporate front groups like ALEC.  Michigan, and even Michigan Republicans, used to be different.  In fact, we have a proud history of not being racist or oppressive.  The underground railroad ran through Michigan, and Sojourner Truth made Battle Creek her home.  In 1855 Michiganders stood up to the federal government and banned the use of public officials to help catch escaped slaves.  Our history of being a fair and accepting people is in serious jeopardy though.  We shouldn’t be surprised that a bunch of mostly white, mostly men, mostly business owners are behind this oppressive movement.  History has a way of repeating itself.

Note: For an interesting micro example of voter oppression, check out this article about a lady who had to hit her husband with her SUV in order to go vote against Scott Walker.

This entry was posted in ALEC, Darwin Booher. Bookmark the permalink.
Logging In...