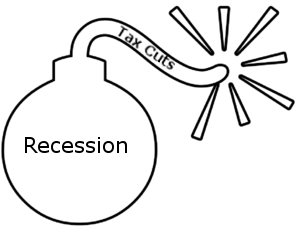 John Engler, former Michigan Governor and current Washington lobbyist, includes among his successes cutting taxes 32 times “saving taxpayers nearly $32 billion.” At least six of those cuts lowered the Single Business Tax rate, a tax Governor Snyder eliminated all together.  Engler was able to pass these tax breaks because the economy was exceptionally strong until near the end of his second term.  However, Engler left office with a 1.8 billion dollar deficit created by a slumping economy and a lack of revenue thanks in part to those 28 tax cuts.  To make matters worse, his annual personal income tax cuts extended beyond his term creating additional revenue problems for Governor Granholm.  Engler’s tax cuts, coupled with a slumping economy, in effect created a tax bomb.   The fallout from his tax bomb left Michigan in a very bad place in terms of revenue when the country entered the great recession in 2007.

Fast Forward several years.  Governor Snyder has been fashioning his own tax bomb.  By eliminating the Single Business Tax he cut 1.8 billion dollars from the tax base.  However, he did make some of that up by reducing tax credits for the working poor (earned income credit), eliminating deductions like the charitable tax deductions, and taxing retirees pensions.  More recently he has eliminated the personal property tax on business equipment.  These moves combined shift nearly the entire tax burden onto individuals with little help from the majority of businesses.  These cuts have caused some schools to go out of business, and many more to cut programs, close buildings, and lay off teachers.  They have also been harmful to local government who are struggling to keep the roads plowed and officers on patrol.  Local governments are also looking to cut other non-essential services.  For instance, Wexford County Commissioners recently voted to eliminate most funding for the local civic arena and ice rink citing declining state revenue sharing as the main reason.

Like Engler, Snyder has begun passing tax cuts that may extend beyond his tenure as governor.  Recently, he passed a bill that will allow people to pay tax on only the difference between the purchase price and the trade in price of a car or boat. This tax reduction will be phased in over several years.  This past week we learned the State has 1.3 billion dollars more in revenue this year than they had planned.  Instead of returning funding to our schools or local government, Republicans are looking at passing personal tax cuts.  Republicans may also phase these tax cuts in repeating the mistakes of the Engler administration.  When looking at future revenue, it should also be noted that more people are buying goods online reducing the amount of sales tax collected.  So far, politicians in Michigan have not been willing to extend the sales tax to online purchases leaving online businesses with an advantage over local businesses and leaving the state with less sales tax revenue than it should have.

The lowering of taxes now, to an extremely minimal level, combined with cutting taxes into the future, create Engler style tax bombs.  Should another recession hit, Michigan will be left feeling the effects of the Snyder tax bomb.  By then, Snyder will be off to Washington or back to working in private equity. When that happens politicians will likely  pass policies that harm children, the poor, and the elderly. Alternatively, we could learn from our past mistakes and tax people and businesses at a rate that is fair but adequate.  We could use the surplus we have now to restore funding to areas that have been cut like schools and local government.  We could also invest in our infrastructure and help rebuild Detroit.  However, this is an election year.  Since Republicans are in charge of our entire government, pandering to voters will be the central mission of their party over the next 11 months.  Meanwhile, the bomb is ticking.

This entry was posted in Business, Richard Snyder, Taxes. Bookmark the permalink.
Logging In...