Audrey Spalding is the Mackinac Center for Public Policy’s Director of Education Policy.  Like so many of today’s education reformers, Spalding has never been an educator, unless you count five months of teaching English in China.  Spalding majored in Journalism and Economics at the University of Missouri according to her Mackinac Center profile.  Prior to working at the Mackinac Center, she worked in Missouri for another anti-government think tank called the Show-Me Institute.  Spalding’s primary experience in education, Chinese aside, is writing about education as a reporter for the Columbia Missourian.  Spalding’s LinkedIn profile informs us that she was indoctrinated by the Charles Koch Institute in a program known as Liberty@Work.  The program “taught associates how to incorporate private-sector practices into the management of a non-profit organization.”

Spalding has had an opportunity to show us how to best “incorporate private-sector practices” in schools as the Treasurer of the Board of Directors of Taylor Preparatory High School (TPHS).  TPHS opened last fall with a freshmen and sophomore class.  TPHS is a for-profit charter authorized by Grand Valley State University (GVSU).  While both GVSU and the TPHS Board of Directors are supposed to offer oversight, the daily operation is left to a company called PrepNet.  PrepNet also leases the school building to TPHS for $20,000 a month!  PrepNet is an affiliate of National Heritage Academies (NHA) and both were founded by J.C. Huizenga.  Huizenga serves as a Grand Valley State University Foundation Director.  He also serves on the Board of Directors of the Mackinac Center for Public Policy.  To summarize, Huizenga helps direct the Mackinac Center which puts out pro-charter propaganda, and then he makes money for himself and for GVSU when they open a new charter together.  Oh, and his work at the Mackinac Center makes him Spalding’s boss.  That sounds a lot like “private-sector practices” to me.

Since Spalding is the Mackinac’s Center’s educational watchdog, you would expect that TPHS would be in full compliance with all applicable laws, contracts, and policies.  According to the TPHS board minutes, only once has the board had the minimum five members necessary to be in compliance with their contract with Grand Valley State University.  Technically, the President of the Board should not have even called those meetings to order.  The President was a 23 year old named Cody Bailey who also has no education experience.  Bailey didn’t call the May or June Meetings to order because he wasn’t even in attendance.  Bailey’s term expired on June 30th, but it appears he checked out early.  The June minutes noted “Ms. Spalding shared her appreciation for Cody Bailey as a founding Board Member of Taylor Prep. The Board joined her in thanking Mr. Bailey for his term of service, and wished him well in the future.”  Bailey’s future actually started back in January when he began working for the Great Lakes Education Project, another conservative think tank that focuses on education policy and politics. 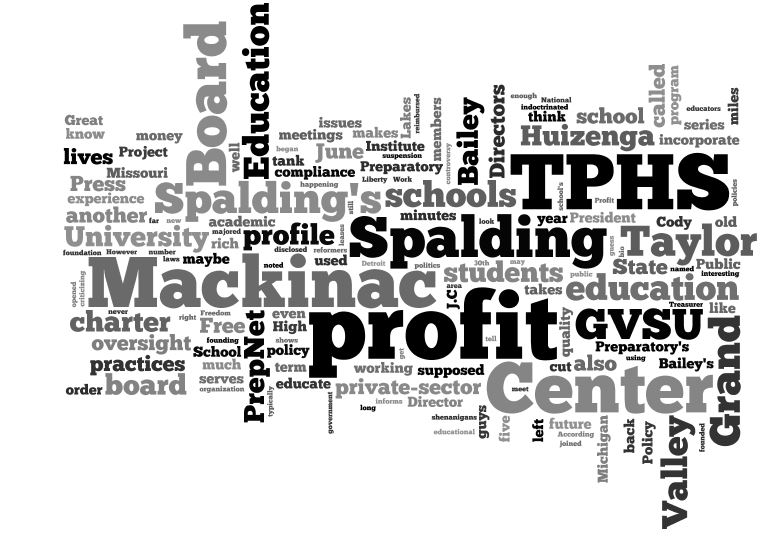 Let’s get back to Spalding though.  Spalding’s Facebook profile and Mackinac Center bio says she lives in Midland.  If that is the case, she lives about 139 miles from TPHS.  If she lives in Ann Arbor as her LinkedIn profile suggests, her commute to Taylor is still around 28 miles.  Why is this significant?  Taylor Preparatory’s board policy states that “The Board may consist of members of the community, parents, and educators.”  Clearly, Aubrey doesn’t meet any of those qualifications.  It would be interesting to  know how much of Spalding’s travel is being reimbursed by the school district.  I thought about pulling a Mackinac Center move and using a Freedom of Information Act request to find out that information.  However, I believe way too much of TPHS’ resources are being wasted already.

The kind of shenanigans going on at TPHS are similar to those recently uncovered at other charter schools by the Detroit Free Press.  The Free Press ran an entire series about accountability issues after a year long investigation.  Not surprisingly, Spalding wrote a piece for the Mackinac Center criticizing the Free Press series.  That controversy led the Michigan Department of Education to look further into the state’s charter schools.  Just this week Grand Valley was put on notice as being at risk for suspension by the Michigan Board of Education for a number of oversight issues as well as low academic performance (Taylor Preparatory’s only academic report shows that 8.3% of their students were proficient in Social Studies).  It’s not as if Grand Valley doesn’t know what is happening over at Taylor Preparatory High School.  They typically have a representative at their board meetings.  The representatives have been nice enough to bring the school GVSU stickers and a banner.  For all of their “oversight” efforts, GVSU takes about 3% of the school’s per pupil foundation allowance.  GVSU takes their cut before PrepNet gets their cut, an amount they haven’t disclosed as far as I can tell.  I guess whatever is left is used to educate TPHS students.

What is clear in all of this is that the attack on public schools by the Mackinac Center and the Great Lakes Education Project (read my post about them here) is not about advocating for quality government or quality schools.  It is about creating another revenue stream for guys like J.C. Huizenga.  Who knows, maybe Spalding’s heart is in the right place and she doesn’t realize that she is just a pawn for a bunch of old rich white guys who live in the greater Grand Rapids area.  Or, maybe she has aspirations of getting rich off students too.