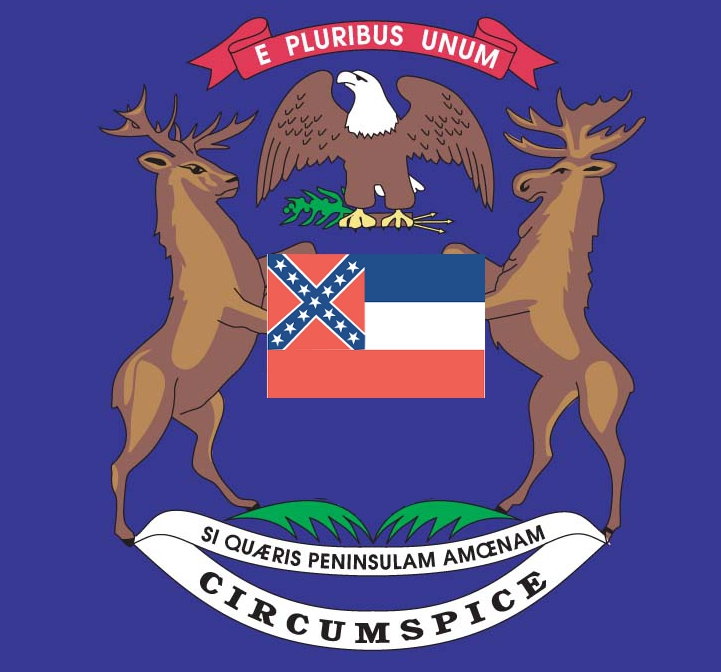 The Michissippi flag. Note the Confederate flag still prominent in the flag of Mississippi.

Some people have begun calling Michigan Michissippi.  This is not meant as an insult to the many smart and decent people who live in Mississippi.  It is meant as an insult to the dominant political force in Mississippi whose ideals are now gaining traction in Michigan.   Those ideals are not a lot different than they were during the time of the Civil War.  In fact, former Senate Majority leader Trent Lott, a Mississippian, even said in 1984 that the Republican platform is composed of ideas similar to those of Jefferson Davis.  Mississippi was home to Davis who was a U.S. Senator before becoming the Confederate President.  Mississippi is so proud of Jefferson Davis that they used millions of dollars of tax money to help pay for the Jefferson Davis Presidential Library.  Yes, Mississippi still honors a racist who committed treason and has the nerve to address him as “President.”

Not only does Mississippi lag behind in its progress with social issues, it also lags behind the rest of the country in many indicators of economic strength.  For instance, Mississippi has the highest percentage of residents living in poverty, it has one of the least educated workforces, and also has one of the highest unemployment rates in the country.  This is despite the fact that Mississippi has  implemented many of the ultra-right wing policies pushed by the extreme right wing organization ALEC.  These are the same policies that Republican lawmakers are now implementing in Michigan.

What links Michigan and Mississippi is more than the implementation of conservative economic policies like our new right-to-work law.  It is a belief that the advancement of commerce is more important than anything else, including our freedoms.  Davis was a proponent of slavery and called it “useful employment.”  Governor Rick Snyder has signed laws that suspend democracy, busted unions, eliminated charitable tax deductions, and he has raised taxes on the poor and on retirees.  He did it all in the name of “job creation,” which sounds like a synonym of “useful employment.”

There are a lot of states that we could learn from when it comes to creating economic prosperity.  Vermont has an unemployment rate of only 5.1% and has one of the highest educated workforces in the country.  But we are not “reinventing” ourselves into Vermont because their plan for economic prosperity includes investing in workers and protecting worker rights.  Instead we are adopting the Mississippi/Republican model that exploits workers to assure personal wealth for corporations and business owners, a modern day enslavement.

The future of Michigan includes a disinvestment in education, an erosion of worker rights, and many low paying jobs.  This isn’t speculation, much of it has become law in the past two years.  Michigan has become part of the deep South.  Welcome to Michissippi.  Now get to work.

Update: On 2/7/2013 Mississippi officially ratified the 13th Amendment joining the other 49 states in agreeing that slavery should be abolished.

This entry was posted in Poor, Richard Snyder. Bookmark the permalink.
Logging In...