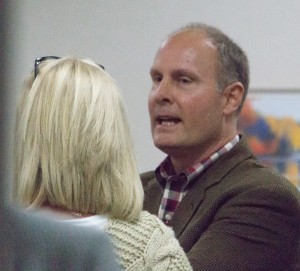 Moolenaar speaking with a Chamber of Commerce supporter.

Republican John Moolenaar is acting like a congressman even before he finds out if will become one.  That’s right, he is already putting special interest before his constituents.  Moolenaar had agreed to debate Dr. Jeff Holmes at Alma College on Monday, October 20th.  Both men are running for the right to represent the 4th District in the U.S. House of Representatives.  The Holmes campaign expected hundreds of people to show up to the event.  A week before the debate was to occur, Moolenaar got an offer he couldn’t refuse.  He was invited to meet with a handful of Chamber of Commerce members in Cadillac.  So Moolenar contacted Alma college last Tuesday to cancel.  Holmes was left to attend the debate alone. 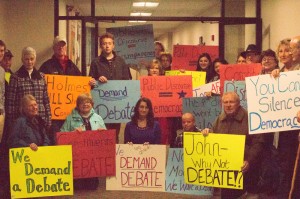 Supporters of the Holmes campaign greeted Moolenaar in Cadillac holding sings reading “We Demand a Debate” and “Public Discourse=Democracy.”  One person asked Moolenaar why he was afraid to debate.  Moolenaar only said he wasn’t afraid and walked into the meeting where a half dozen people awaited his arrival.  If Moolenaar is not afraid to debate, then he must be afraid to tell the Chamber of Commerce no.  For that reason, and many more, he will probably fit right into a dysfunctional Congress should he win the seat on November 4th.  The constituents on the other hand, will be the ones who will lose.

This entry was posted in 2014 Election. Bookmark the permalink.
Logging In...