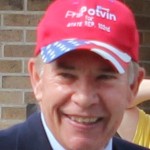 Anyone remember when Notre Dame hired George O’Leary as their football coach and then fired him five days later for falsifying his resume?  Well, State Representative Phil Potvin and O’Leary seem to have more in common than just being Catholic.  Phil Potvin’s official GOP house website states “Potvin retired as Chief Executive Officer of Western Concrete in 2006 and continues as a consultant to the company for property management in Big Rapids and Cadillac.”  In a recent candidate questionnaire that appeared in the Cadillac News Potvin said “I joined my dad at Western Concrete in 1971 until 2006 when the business sold.”  Not only do these statements seem to conflict with each other, they also conflict with reports filed with the State of Michigan. If Western Concrete Products was sold, or Potvin retired, why did he continue to sign off as president on the company’s corporate entity documents until 2011?  Why was he the one that disbanded the company when he filed a form that amended the articles of incorporation to read “the term of this corporation shall expire effective as of March 31st, 2011?”

Also at issue is his work as a “consultant for Wexford Concrete Properties.”  Potvin organized that company in 2007 according to the corporate entity documents.   Potvin listed his home address on Petrie Road in Cadillac as the initial office, and that address is where the yearly annual reports are sent.  Potvin’s name is the only one that shows up in the seven filings for Western Concrete Properties.  He is listed as “organizer,” “manager,” “managing member,” “member manager,” and “managing partner” depending on the year.  Nowhere is he listed as a consultant.  One is left wondering who he would be consulting anyhow.
It appears that Wexford Concrete Properties exists to sell or rent out the defunct Western Concrete Concrete Products properties.  A 2011 article in the Traversce City Record Eagle highlighted problems Potvin was having renting one of the closed Western Concrete Products sites in Traverse City.  According to the article, a Vietnam veteran was renting space from Potvin for his hot dog stand but didn’t have the proper permits to sell food.  The Vietnam veteran was evicted by Potvin and he told the Record Eagle “they got to me through him.  Being a high-profile individual, he didn’t want to fight my battles.”

All along Potvin has touted his business experience to convince voters that he could work the same wonders for our government that he worked for Western Concrete Products.  However, it appears he has misrepresented the level of success that he had with the company.  On top of that, we know his company received a $162,500 fine from the Department of Environmental Quality when they buried hazardous waste about a half of a mile from Cadillac’s well field.

George O’Leary was fired after five days in office.  In a few short weeks voters will decide if they should send Potvin back to Lansing for a third term.  He hopes to do for our State what he did for Western Concrete Products.  That is a scary thought.

This entry was posted in 2014 Election, Phil Potvin. Bookmark the permalink.
Logging In...