Governor Candidate’s Lack of Presence “Up North” Could Prove Costly 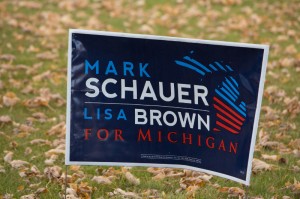 Perhaps the only Mark Schauer sign in Wexford County.

If you live in a strong Republican or Democratic area, or in a gerrymandered district, you are probably used to your vote not meaning much.  However, your vote for Governor and Senator will matter come November 4th.  While Gary Peters has a pretty comfortable lead, and will likely be our next U.S. Senator, the Governor’s race is a toss up.  Mark Schauer is slightly behind Governor Snyder in the polls, but the race is within the margin of error.

Considering the tightness of the Governor’s race, you would think that the candidates would be crisscrossing the state looking for votes.  While that may be true, neither the criss nor the cross are occurring in Northern Michigan.  For instance, I live in Wexford County. Mark Schauer made one campaign stop here.  That occurred over a year ago and was held during the work week at 2:30 in the afternoon.  Governor Snyder hasn’t made any campaign stops here to my knowledge.  When it comes to getting supporters yard signs, the Snyder campaign has made them available at a local Republican campaign office.  To get a Mark Schauer sign I was told I would have to drive 44 miles to Clare.  In fact, in the 21 most Northern Counties in the Lower Peninsula only 3 have locations where Mark Schaur’s yard signs can be can be obtained.  I know yard signs don’t vote, but a total lack of presence by the Schauer campaign cannot be beneficial.

When Lon Johnson became the chair of the Michigan Democratic Party, he said the Democrats would “fight everywhere.” Since Johnson had just attempted to win election as a state representative “up north” in the 103rd district, I was convinced. However, I haven’t seen any change between this election and the last one in the Democratic Party.  I also haven’t seen any change in the Republican Party who count on votes “up north” without actually working for them.  If Schauer or Snyder lose by a few percent or less, you have to wonder if  their general disregard for pretty much all of Northern Michigan didn’t contribute to the loss.  It’s never wise to take voters, or votes, for granted.

This entry was posted in 2014 Election, Richard Snyder, Wexford County. Bookmark the permalink.
Logging In...