Governor Snyder Deceived You On School Funding. Here is How.

Governor Snyder used fuzzy math when he proclaimed he increased school funding $660 in Michigan during his recent state of the state address.  A quick look at the Senate Fiscal Agency Report shows you that per pupil school funding is actually $120 less than the last year Governor Granholm was in office.  In fact, today’s per pupil funding is still less than the 2006-07 levels!  The Snyder administration used creative accounting to come up with their numbers.  They added the increases to the school employee’s pension fund and one time “best practices” money even though those items were not counted towards school funding increases prior to the Snyder regime.  The Governor’s accounting isn’t quiet as bad as Enron’s, but it isn’t on the up and up either. 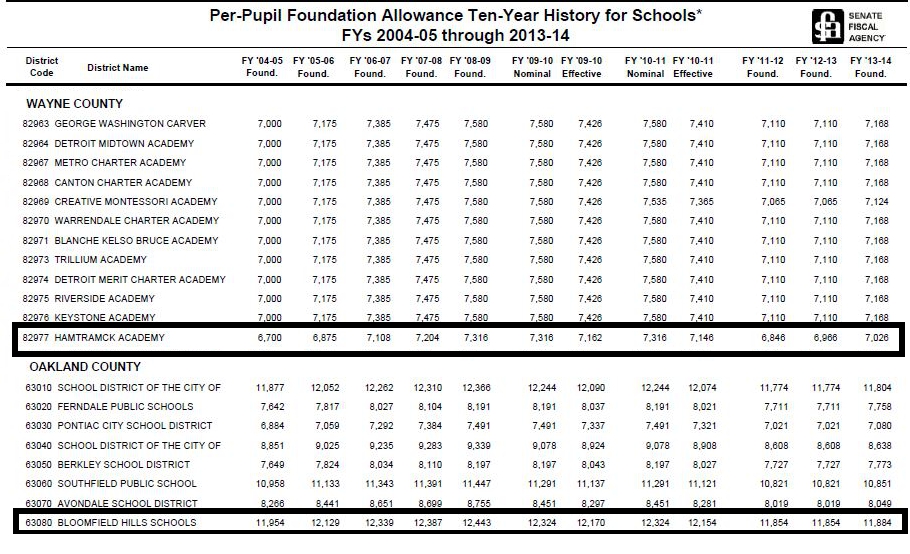 The Governor has also failed to deal with the discrepancy in school funding that dates back to 1995 and the passage of Proposal A.  Most schools this year are receiving $7,026 per pupil in funding.  That includes the Hamtramack School District whose residents are the third poorest in the state (551 out of 553).  The two poorest, Highland Park and Muskegon Heights, are being operated by Emergency Managers.  Meanwhile, Bloomfield Hills School District, which has the richest residents per capita in the state, receives $11,804 per student.  So far, the Snyder administration has offered up no bills to update Proposal A and fix these discrepancies.

No one is suggesting that we triple school funding to the levels ($20,500) of the private school where Governor Snyder’s kids went.  However, most Michiganders want school districts adequately funded and they want funding to keep up with the cost of inflation.  That has not happened as proven by the vast increase of school districts in financial trouble under the Snyder Administration.  It also shows that educating public school children is not a priority for Governor Snyder despite what his $400,000 Super Bowl ad might tell you.

This entry was posted in Richard Snyder, Schools. Bookmark the permalink.
Logging In...