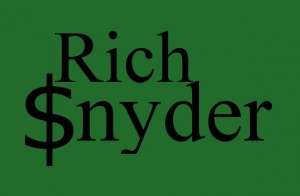 The pre-primary campaign finance statements are now online and they paint a stark contrast between Governor Rick Snyder and his opponent Mark Schauer.  Governor Snyder had 69 individuals donate the maximum contribution of $6,800 this period.  Those 69 people netted his campaign almost half a million dollars alone.  Snyder had about 6,500 total donors whose average donation was about $510.  Surprisingly, none of Michigan’s billionaires, whose income grew 22% in the last year under his economic plan, are among those donors.  However, two out-of-state billionaires did donate to Snyder.  Conservative crusader David Koch, the 6th richest person in the world, donated the maximum amount  Former New York City Mayor Michael Bloomberg, the 14th richest person in the world, also donated the maximum amount.  Meanwhile, Mark Schauer had only three individuals donate the maximum amount.  Schauer also had a lot more donors this period, over 17,000, and his average donation was about $110.  These numbers clearly show who will work for the populace and who will work for the prosperous.

This entry was posted in 2014 Election, Richard Snyder. Bookmark the permalink.
Logging In...