What is Wrong with Lansing? Meet Senator Darwin Booher 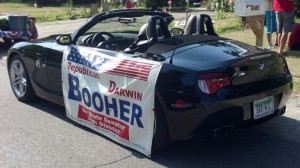 Senator Darwin Booher is one of the most out of touch politicians in Michigan.  I’m not saying Booher is out of touch just because he chose to ride in a BMW at the Lake City 4th of July parade.  Sure, these cars start at about 48,000, or as much as the median household income of the residents in the Lake City area. These BMW’s (Z4) were once made in the U.S. and now they are being made in Germany.  Booher could have shown a great commitment to Michigan workers by driving anyone of these Michigan made vehicles.

I’m not saying Darwin Booher is out of touch just because he used tax payer dollars for his membership to the extreme right wing organization the American Legislative Exchange Council (ALEC).  Sure, ALEC pairs corporate executives with politicians to write “model legislation” that stacks the deck for corporate America.  Meanwhile, Booher represents a rural area where most of the businesses are small “mom and pop” type operations.

I’m not saying Darwin Booher is out of touch just because he INTRODUCED the ALEC backed voter I.D./voter oppression bill (Senate Bill 803).  Even Governor Snyder thought the bill was too extreme and vetoed it.  Booher was brazen enough to reintroduce nearly the same bill (Senate Bill 1219) despite little proof that voter fraud is a real problem in Michigan.

I’m not saying Senator Booher is out of touch because he was a co-sponsor of the union busting Senate Bill 120.  Sure, this bill would allow your local officials to create a “right to work zone” and put Michigan unions on the endangered list.  The last thing Michigan needs is to give local politicians, many of them business owners, the right to bust unions in their community.

I am saying Booher is out of touch because he has done all of these things and continues to do little that would help the average constituent of the 35th district.  Booher must know that people are getting a little irritated with his total disregard of anyone except the most powerful Lansing lobbyists.  After all, he co-sponsored a bill  (Senate Bill 943) that would make it a crime, punishable by a year in jail, if you “directly or indirectly” “impede, intimidate, or interfere” with a public official or a member of his or her family. Too bad his constituents cannot introduce a bill making it a crime to impede, intimidate, or interfere with a person’s right to have their voice heard in Lansing.  Booher would easily be found guilty.

This entry was posted in Darwin Booher. Bookmark the permalink.
Logging In...