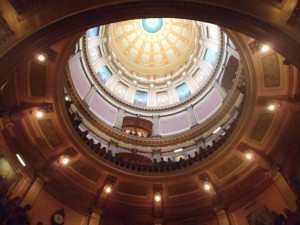 Inside the Capitol Building. Photo by Chad Phillps

According the FBI, Flint and Detroit are two of the top five most violent cities in America.  Yet, Flint has just 1.2 police officers for every 1,000 residents, and Detroit has just 3 police officer for every 1,000 residents.  It is clear that neither of those two cities have a large enough police force to deal with the amount of violent crimes taking place within their borders each day.

There is one place that will have more than enough police presence though, the Capitol Building in Lansing.  According to a Detroit Free Press article, legislators are more than doubling the amount of capitol police on duty and quadrupling their budget.  There will now be one police officer for every six legislators!  It’s hard to say what these police officers will be up to since there has been virtually no crime at the Capitol Building ever!

If self serving behavior were a crime, then we would need those extra police officers at the Capitol Building to arrest Republicans legislators.  Since it isn’t, those extra police officers should be patrolling the streets of Flint and Detroit where they could save lives.  This is another great example of Republicans wasting money while running around advocating for fiscal conservatism.

This entry was posted in Law Enforcement. Bookmark the permalink.
Logging In...