By now you may have read the bigoted remarks of Brian Klawiter who owns a diesel repair shop in Grandville called DieselTec.  Klawiter went off on his company’s Facebook page saying because he is a Christian he would . . .

“not hesitate to refuse service to an openly gay person.”  He also said he will “offer a discount if you bring in your gun” unless you are an on duty police officer.

What you may not have read is all the comments on that Facebook post.  There are the run-of-the-mill comments supporting and condemning his view, many of which attempt to determine “what would Jesus do.”  There is a posting of his criminal record and a link to the ethical standards of one of his main suppliers, which he seems to be violating.  There are many hilarious memes and scores of pictures of men embracing men, an obvious attempt to irritate Klawiter and his supporters.  However, the most powerful comment came from a self-described gun toting conservative.  Joe Quisenberry said . . .

I am a conservative, multiple gun owner, CPL holder and carrier, and diesel truck owner. I am also the proud father of an amazing son that may not be welcome in your fine establishment. You will never turn a wrench on my diesel. I hope your self righteous judgmental attitude forces you (to) beg for a meal at Mel Trotter (homeless shelter) some day!!”

Lets hope that Quisenberry’s comments are indicative of a move towards tolerance by the more sane members of the political right.  Perhaps someday “liberty and justice for all” will include gay people who engage in such offensive and outrageous acts as buying a cake or getting their truck fixed. 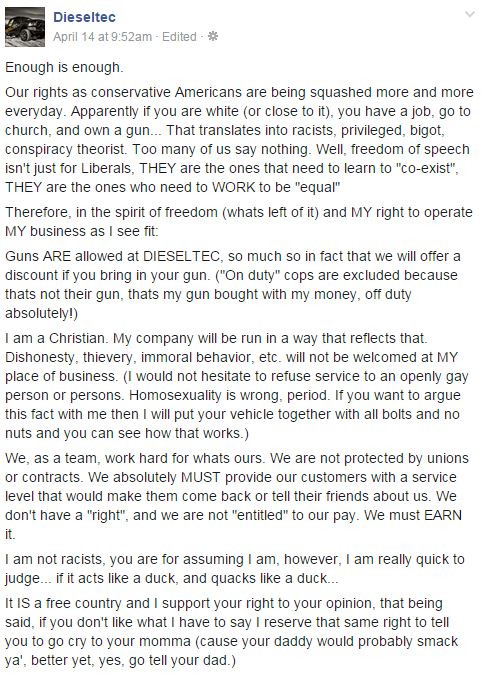 This entry was posted in Equality. Bookmark the permalink.
Logging In...