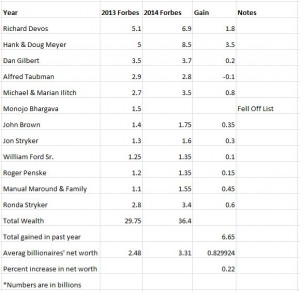 Dick Devos, the big money behind the Republican Party in Michigan, did better than the average billionaire.  He made 1.8 billion dollars over the past year.  DeVos is now worth 5.1 billion dollars.  To put that in perspective, DeVos has more money than the owners of the Detroit Lions, New Orleans Saints, Indianapolis Colts, and the Washington Redskins combined!  You would have to pool the average wage of 177,582 Michiganders to have as much money as Dick DeVos.

It is clear that with the election of Richard Snyder, a millionaire but not yet a billionaire, we have established a plutocracy (a government ruled by the rich) in Michigan.  Governor Snyder’s latest campaign finance report is a who’s who list of Michigan’s most wealthy individuals.  His tax policy raised taxes on the poor while cutting taxes on some of Michigan’s richest individuals.  Snyder’s own dashboard reports that despite the rich getting richer, 25% of our state’s children still live in poverty and that number has not improved.  Voters have a clear choice in 2014.  Double down on plutocracy and the reverse Robin Hood economics of the Richard Snyder administration, or vote Mark Schauer for Governor.

Note: The original post said the increase was 14%.  Thanks to my wife, who teaches eighth grade math, for correcting me.  Also, William Clay Ford Sr, one of Michigan’s billionaires and owner of the Detroit Lions, passed away two days after this was originally posted.

This entry was posted in DeVos Family, Richard Snyder, Taxes. Bookmark the permalink.
Logging In...