How One of Governor Snyder’s 51 Executive Orders Hampered Charities 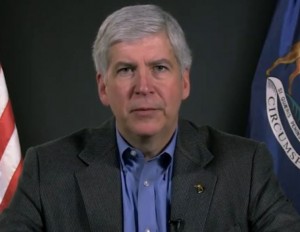 Oh how conservatives have taken to bashing President Obama for taking executive action on immigration.  Even Saturday Night Live poked fun at Obama for using an executive order instead of waiting for Congress to pass a bill, which many believe would never have happened.  Yet, conservatives are pretty quiet on the 51 executive orders signed by Governor Snyder.  One of these executive orders caused serious problems for charities, even delaying much needed fundraisers for one charity by nearly two years!  What follows is just one example of executive action gone wrong.

Early in 2012, a 501(c)3 non-profit that I am a member of began the qualifying process to hold charitable gaming fundraisers.  We went through all the steps required by the state including being recognized by the local township.  By winter, we received a notice from the Charitable Gaming Division that we were approved to conduct charitable gaming under PA 382 of 1972.  It turned out that notice was only good for making paper airplanes.  At about the same time we were approved, the Governor bypassed the legislature and issued an executive order that transferred charitable gaming licensing like poker, but not bingo or raffles, to the Gaming Control Board.  When I contacted the Gaming Control Board about an event we were planning, they refused to recognize us as an approved organization despite our approval letter.  A call the the Charitable Gaming Division hoping they would clear up the matter didn’t help.  I was told they were just as confused about the process as I was.  So, we were back to square one.

Actually, we were back to square negative one.  The Gaming Control Board’s Executive Director decided he should also throw around some executive authority and he created a moratorium on new locations.  We were told we could only host an event at our own venue, which wasn’t possible, or at an already approved venue.  No venues in our rural county, or any neighboring county, were approved that I was aware of, and the Gaming Control Board told me they couldn’t supply a list of approved venues to help us out!  So we began looking for a new home location that would work for holding a poker tournament. We found a location, submitted all the change of address forms to the State and Federal Government, and then resubmitted our application.  Now a year had passed.

Several weeks later, instead of receiving an approval, we received an additional list of questions to answer, many of which could have been put on the original application.  We submitted that information and waited the six weeks we were told it would take to get approved.  Six weeks passed and nothing happened.  When I called to complain, I was given some surprising news.  Charitable Gaming Board Executive Director Richard Kalm used the power under Governor Snyder’s executive order to issue a whole list of “emergency rules.”  When I called and asked to talk directly to Kalm to explain our situation, I was told he didn’t have time to talk to me.  Come to find out, I wasn’t alone in my frustration with Snyder and Kalm’s overreach.  A lawsuit was filed on behalf of charities and the Senate passed a bill to try to prevent the rules from being implemented. Neither were successful.  Republican Rick Jones called the regulations “extremely unfair.” So once again the rules for approval were changed on us mid-game and without notice. Now a year and a half had passed.

Once again we took to filling out more paperwork. This time we had to submit detailed information on our dealers, and even more information on our location despite the fact that a Gaming Control Board official had visited the location and met with the owners of the building!  After all of that, and more twists and turns that I won’t bore you with, we were finally approved nearly two years after starting the process!  Had we have known it would have taken that long, we probably would have opted for a bake sale.

One of Governor Snyder’s main weaknesses is his inconsistency.  He repealed the motorcycle helmet law causing as many as 12 more deaths a year, but then he acts unilaterally to complicate fundraising for all charities because of a few bad apples.  He passes right-to-work for most public employees, but he exempts policemen and firemen. He says he will make government more efficient, then he issues executive orders that confuse the people they effect and the people who are supposed to implement the rules. He says that Washington D.C. should be more like Lansing, then he uses the sameWashington D.C. tactics to get his way regardless of what anyone else thinks.  I’d be wiling to bet that Governor Snyder will continue to struggle with consistency and fairness over the next four years.  Then again, to make that bet I might have to file paperwork with the state, and I don’t have an extra two years on my hands!

This entry was posted in Richard Snyder. Bookmark the permalink.
Logging In...